China cracks down on feminism 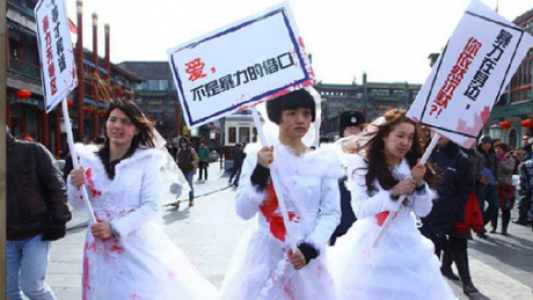 State feminism has been an integral part of the China’s ideology ever since the establishment of the People’s Republic of China in 1949. The Communist Party has brought tremendous advancement concerning the involvement of Chinese women in all spheres of life. They invented International Women’s Day, which is now celebrated in most countries around the world.

Now, however, Western-style feminism is getting in. Intersectionality, division, divisiveness, the entire gender mess, and feminist violence are now being seen in China.

In December 2016, President Xi Jinping gave a major address to university heads and Communist Party officials, urging them to tighten ideological controls on campus and transform universities into “strongholds of party leadership.” As in the West, international feminism started in the Universities, limiting discourse and raising the usual lies and distortions.

The Chinese are slow to learn from other nations, however. They have made martyrs out of a handful of feminists — called the “Feminist Five” — not by killing them, but just because they treated them according to the law when they caused some vandalism.

It is hard to sympathise with a repressive regime. But when any nation is faced with a violent ideology that has no care for the society it infects, it is hard not to feel some sympathy for its citizens.

Recently, twelve youths were confined, said by Marxist sources to have been ‘crusading for worker rights’. They had been undertaking typical feminist activities such as kidnapping a student at Peking University grounds and beating up others.

In a sign that Western feminism had arrived, at another demonstration, feminists were complaining about equality. Thorough medical exams are required in many of China’s industries: it is a part of their health system. Feminists did not want women to have to go through the medical procedures, however, and blockaded workplaces. Holding up signs like “No pelvic exams!” and “No questions on menstrual periods!” the feminist agitators said the medical exams for women were misogynist as men did not have to submit to gynaecological examination.

Zheng Churan of the Feminist Five has been a convert to Western feminism, starting when she was an understudy at the lofty Sun Yat-sen University in Guangzhou. In August 2014, again in typical feminist fashion for not understanding the nuances of a situation, she did quite a lot of harm for some women on strike. The sanitation labourers at University Town were on strike and the media were only reporting on the men, and only taking pictures of male workers. Zheng was incensed and started to take pictures of the women which she distributed. This enabled the authorities to identify the female strikers and deal with them, just like they did with the men. “Why weren’t the women workers being shown?” Zheng asked but never listened to the answer. She posted an online photo essay with the title, “These Are Women with Strength and Power.” And removed their strength and power.

These new feminists are tapping into a wide discontent among women in China as it moves gradually towards a more self-reliant, less state-reliant government. Along with this, the feminists are appealing to the repressed homosexual women in China, with a message already openly disparaging of family, heterosexuality, marriage and child-rearing.

The official communist feminist movement seems surprisingly quiet in all this. As the infiltrating tactics of Cultural Marxism start to encourage feminism in senior schools, the small but growing Western feminist movement takes hold. Women who had previously avoided political discussion are now deciding to identify themselves publicly with this kind of feminism on social media. China’s government internet censors are working overtime to forcefully close down this ‘new’ feminist content.

Censorship never works for long. Only open debate, public discussion, clear examination of what is, and is not, the truth can help to dispel an invidious ideology that relies on stealth, lies, deceit and violence.

0 comments on “China cracks down on feminism”

Other items filed under big brother