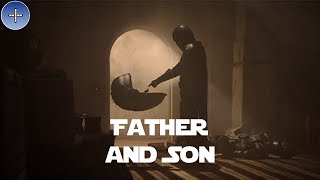 The Mandalorian is an American space western web television series created by Jon Favreau, directed by Dave Filoni, and released by Disney+ at the end of 2019. It is a spin-off from Star Wars, as you might have guessed from this trailer:

The Mandalorian IMDB rating is 8.8/10 and 95% on rotten tomatoes. There are 8 the Mandalorian episodes released till now in the first season.

All very interesting, maybe even entertaining, but why is this being talked about on Human Rights And Wrongs?

This series shows a single dad’s love and care (positive masculinity) which is soothing and worth watching during these times when men are deemed criminals before birth (a take-over from the Christian concept of Original Sin) or are viewed as potential rapists and 2nd class citizens. Fathers are being alienated and erased from their kids and the family court has become fully corrupt. Masculinity is even deemed toxic by people who really should know better.

The main protagonist in the web series is the Mandalorian, a bounty hunter. He is a foundling who was rescued at a young age by the Mandalorians. The point to be noted is that Mandalorian is not a race but a creed (recall the guys in white helmets in the Star Wars movies).

Now, as we see, bounty hunting is not a very very great job with high payments as he gets very little money for hunting as shown in the series. He was offered a high bounty for an unknown target with no information at all, just the location with a tracker and the age that was 50 years.

The story takes place in the galaxy. Many times alienated or erased fathers live nearby on the next street, but it seems he is living galaxies away.

Dave Filoni’s directorship is subtle and moving. The Mandalorian never takes off his helmet, in resemblance of how fathers hide their feelings and expressions as they need to be tough, but his expressions are still clearly seen, just as those of fathers are to those who care to notice the signs.

The Mandalorian, after knowing the target is a kid, saves it from an IG 11 robot shooting on his head.
The kid too saves the Mandalorian from the mud horn when he tries to get the Easter egg by waving his hands after that he becomes unconscious and that establishes a connection.

When the kid was eating a frog the Mandalorian said spit that out as he cared frog is not a good thing to eat.

We also see the mud horn trying and giving his life to save his egg. The father question: The Mandalorian asks “What are you going to do to the kid?” A father and no one else will ask this as it was against the guild code and bounty rule.

Fathers are the unsung heroes. They work hard. They don’t get any credit. They cover the kids and the whole family.

Saving the kid: going back and saving the kid and holding him in his one hand is a great show of positive masculinity.

The kid at the beginning was playing with the spaceship gear ball. He said, “this is not a toy” but now he himself gives it to the kid to play.
The kid also tries to heal the Mandalorian showing a son’s love for his father.

Mandalorians, being masculine, have to be hard and tough as they are the bounty hunters but at the same time, he has a soft heart. He goes against his job and guild rules to save the baby kid Yoda.

Until it’s of the age as reuniting with its own kind you are as his father.

Now as you watch these clips, or the television series, we hope it is clearer to you that there is more than just whacky shoot-ups going on. This is caring paternity; masculinity at its best.

This post is based on Mandalorian and the father’s love by Vivek Singh, published on NEWSOFX dated 29 January 2020.